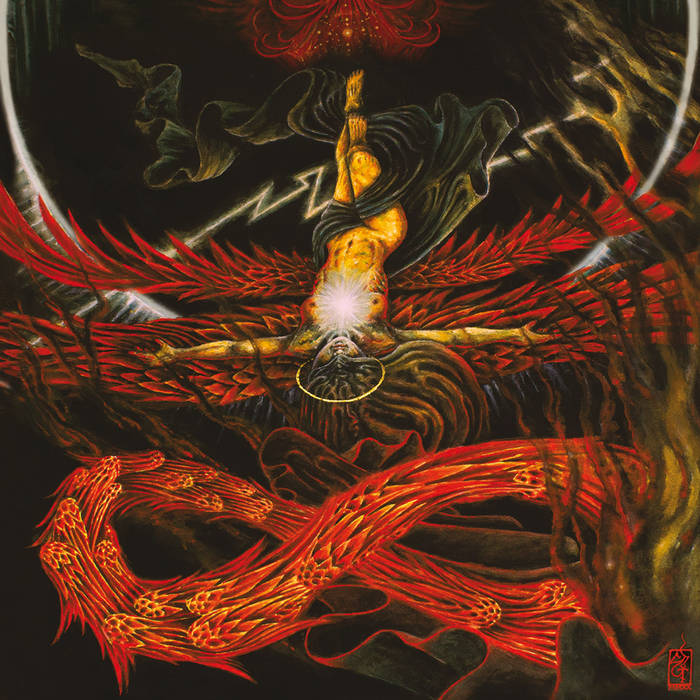 "Two years after the release of “Metamorphosphoros”, PRECARIA returns with “Theosulphuros”, the second and final part of a diptych of split albums dedicated to the concept of “Theion”, the divine fire which transforms those who seek true light through darkness. Accompanying the Mexican black metal band in its spiritual voyage there's ÔROS KAÙ, a mysterious one-man project from Belgium which debuted in June 2020 with "Imperii Templum Aries" (to be released on vinyl by I, Voidhanger Records).

The world “Theion” translates from ancient Greek as both "sulphur" and "divine fire", and finds a precise depiction in Elijah Tamu's sumptuous cover painting (a continuation of the “Metamorphosphoros” original art), developed from an idea of PRECARIA's Hermit and featuring a female figure suspended upside down. “The figure represents the human soul in the process of death, transitioning into a greater realm of existence,” explains Tamu, a devout Christian who explores the boundaries between light and darkness not only through his paintings, but also with his own black metal band, PANEGYRIST. “The fiery wings indicate the fiery principle whose source is God,” the artist continues, “a force that destroys illusions and false aspects of the self, while refining and revitalizing the deeper essence of ourselves.”
Hermit of PRECARIA puts it down in a simpler way: “It's a process of purification, an alchemy of the soul,” he says, and describes the concept behind “Theosulphuros” as “an observation on spiritual ascension and descension during life and after death.” PRECARIA's savage kind of black metal is exactly that: the representation of a soul in turmoil, done through a feast of dark riffs, tempo changes and sulphurous melodies.

ÔROS KAÙ is no less visionary and magical in its purification process and its quest for divine darkness. Imagining death as a gateway of transformation, the Belgian artist performs an opening ritual the way ancient cultures did. “The Egyptians usually opened the mouth of the dead to let the soul fly to the other life,” he tells; “the purpose of my music is the same: to open the way to make things possible. I'm under the ascendant sign of Aries (Kaù), and that means that I'm at the beginning of things and actions, leaded by the first flame of life.” Despite the violent and uncompromising approach, ÔROS KAÙ's black metal exorcisms remain meditative and hypnotic, and give to the spiritual quest of “Theosulphuros” a perfect end with the monumental “Solve”, which releases tension through psychedelic noises and ambient fumes."

Let the passage be free unto the crawling chaos open unto me the way across angled time and curved space.

Bandcamp Daily  your guide to the world of Bandcamp